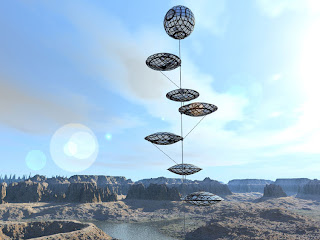 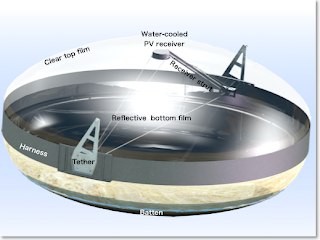 Appalachian Trail In The Air

Just as the Appalachian trail was cleared across the USA, and bike paths are cleared in cities, LawOfTheAir.com should seek and spearhead the creation of aviation and border-issue-clear lanes for Solar (passive) ballooning.

Humans are ocean faring ever since we were tool-making; but we are airborne for only a few hundred years. We have almost no collective experience or lore about living in the air. Compare this to ocean dwelling--ideas of the doldrums, the storms, the Easterly winds, etc. are in poetry, literature and public knowledge.
Posted by Blogger at 11/01/2008 02:53:00 PM No comments:

A Woman's Place is in the Air

As I pointed out here, ballooning and passive flight are about persistence, being and nurturing, and not about brute force, loud noise and speed. The former are conventionally construed as women's values, the latter, men's values.

So it is nice to stumble upon an article on women's role in early flight. These women are mentioned:

In July, 2008, balloons carried Lego payloads into the stratosphere. The "High Altitude Lego Extravaganza" was sponsored partially by Lego, the University of Nevada-Reno, National Instruments, and The Energizer Battery Company.

Dawn of the age of phlight

We live in the dawn of the age of phlight.

What is phlight? It is flight, but spelled with a "ph." Why? Flight today means "fossil fuel" flight, hence the "f;" we are interested in promoting renewable sun-powered flight, hence the "ph" of phlight, standing for passive heliogenic flight. A cloud weighs half a million kilograms yet is suspended in the air by sunlight alone. That is the emblem of phlight; let us say that the cloud phlies.

Flight--with a fossil fuel f--is done today by airplanes, helicopters and rocket ships, and also hot air and weather balloons, dirigibles, blimps, zeppelins--even gliders, since they are pulled by fossil-fuel powered vehicles. All of these rely on fossil fuels, hence they fly and do not phly.

Phlight--passive heliogenic phlight-- is done today by kites, passive solar-powered balloons, and Tomas Saraceno's work such as the Museo Aero Solar and his flying garden. There are also promising experimental solar collectors and kite-like wind generators, but progress is slow.

We envision a day when people sleep, work and phly daily along internationally accepted phlight paths. The slow progress towards phlight is due to the significant challenges that phlight poses. Understanding the challenges is a necessary first step towards finding solutions. The challenges are technological and social.

The ocean was first traveled in passive heliogenic sea craft. The earliest seamen innovated a tremendous range of technologies that benefited all humankind, such as star navigation and tension-based sail structures. They must have been crazy, taking to sea on little more than a song and a hope; yet they discovered and populated the world.

Air travel has developed in reverse: first came fossil and carbon-fueled flight (even the first hot air balloons were heated by wood burning). Phlight had to await the high-tech fabrics and portable oxygen needed to enable a human to live in the oxygen-deprived, cold atmosphere. But today events pressure us to take to the skies. Overpopulation and ecological stress motivate humanity to leave the ground and take to the air.

The Graf zeppelin flew over a million and a half kilometers, including a trip around the world, but was retired as it was too slow (90 km/h) and too dangerous (flammable hydrogen). Phlight has different concerns: no need for speed--phlight is about dwelling, not transporting--and no danger--just solar powered air--and no need for such fine steering control, nor tables with linen table cloths.

The first phlying pioneers need to be extremely motivated people, just like the first seaman, and the first pilots. Until these people show up we can plant phlying gardens. We can hoist an atmonaut into a phlying meditation space tethered to the ground. Perhaps an X-prize can go to the first atmonaut to stay aloft for a month, or a year, in phlight. We can begin to request phlight paths from the owners of the jumbo jet superhighways, and we begin to collect the GIS data to comprehend atmospheric flows.

Phlight is a critical step towards easing our planet's burdens. Once achieved, we can begin tearing up concrete and liberate the world-around layer of soil from its asphalt prison, leaving it to do what it does best: make food and support the biosphere. We can achieve humanity's original dream of taking to the skies, not on the back of a roaring engine, but on the caress of a cloud.

The Warsaw Convention took place in Warsaw, on 12th October 1929. Experts in the field of Aviation Law, from thirty one nations, arrived in the Polish capital to create a legal framework that still binds international aviation today (albeit modified, most notable at the Hague in 1955 and Montreal 1999).

The principal purpose of the Warsaw Convention was to determine the liability of air carriers in the case of an accident, both in regards to passengers and also baggage and cargo. One of the main reasons that the Warsaw Convention needed amending in Montreal was because the maximum compensation that an airline could be forced to pay in the event of an international accident was 75,000 US dollars (for the death of one person). This limit, set to protect a fledging aviation industry from bankruptcy, has now been changed, so that the minimum a bereaved family can claim - without having to prove the airline’s negligence - is 135,000 dollars. And if the carrier is found at fault for the accident... Well, then the sky’s the limit.

Convention for the Unification of Certain Rules for International Carriage by Air (Montreal, 28 May 1999)

Article 2 - Carriage performed by State and carriage of postal items

Chapter II - Documentation and Duties of the Parties Relating to the Carriage of Passengers, Baggage and Cargo

Article 6 - Document relating to the nature of the cargo

Article 10 - Responsibility for particulars of documentation

Article 12 - Right of disposition of cargo

Article 13 - Delivery of the cargo

Article 14 - Enforcement of the rights of consignor and consignee

Article 16 - Formalities of customs, police or other public authorities

Article 17 - Death and injury of passengers - damage to baggage

Article 21 - Compensation in case of death or injury of passengers

Article 22 - Limits of liability in relation to delay, baggage and cargo

Article 42 - Addressee of complaints and instructions

Article 56 - States with more than one system of law

The Montreal Convention, formally the Convention for the Unification of Certain Rules for International Carriage by Air[1], is a treaty adopted by a Diplomatic meeting of ICAO member states in 1999. It amended important provisions of the Warsaw Convention's regime concerning compensation for the victims of air disasters. The Convention re-establishes urgently needed uniformity and predictability of rules relating to the international carriage of passengers, baggage and cargo. Whilst maintaining the core provisions which have successfully served the international air transport community for several decades (i.e the Warsaw regime), the new convention achieves the required modernisation in a number of key areas. It protects the passengers by introducing a modern two-tier liability system and by facilitating the swift recovery of proven damages without the need for lengthy litigation.

Under the Montreal Convention, air carriers are strictly liable for proven damages up to 100,000 Special Drawing Rights (SDRs), a mix of currency values established by the International Monetary Fund (IMF), approximately $138,000 per passenger at the time of its ratification by the United States in 2003. (As of January 2007, the value has risen to roughly $149,000.) For damages above 100,000 SDR's, the airline must show the accident that caused injury or death was not due to their negligence or was attributable to the negligence of a third party. The Convention also amended the jurisdictional provisions of Warsaw and now allows the victim or their families to sue foreign carriers where they maintain their principal residence, and requires all air carriers to carry liability insurance.

The Montreal Convention also changes and generally increases the maximum liability of airlines for lost baggage to a fixed amount 1000 SDRs (the amount in the Warsaw Convention is based on weight of the baggage).

Montreal convention was brought about mainly to amend liabilities to be paid to families for death or injury whilst on board an aircraft.

EU countries jointly ratified the convention on 29 April 2004, and it came into force in those countries on 28 June 2004.

The International Air Transport Association is an international industry trade group of airlines headquartered in Montreal, Quebec, Canada, where the International Civil Aviation Organisation also happens to be headquartered, even though they are different entities. The main objective of the organization is to assist airline companies to achieve lawful competition and uniformity in prices.

IATA was formed in April 1945, in Havana, Cuba. It is the successor to the International Air Traffic Association, founded in The Hague in 1919, the year of the world's first international scheduled services. At its founding, IATA had 57 members from 31 nations, mostly in Europe and North America. Today it has over 240 members from more than 140 nations in every part of the globe.

For fare calculations IATA has divided the world in three regions:

To this end, airlines have been granted a special exemption by each of the main regulatory authorities in the world to consult prices with each other through this body. However, the organisation has been accused of acting as a cartel, and many low cost carriers are not full IATA members. The European Union's competition authorities are currently investigating the body. In 2005, Neelie Kroes, the European Commissioner for Competition, made a proposal to lift the exception to consult prices. In July 2006, the United States Department of Transportation also proposed to withdraw antitrust immunity [1]. IATA teamed with SITA for an electronic ticketing solution [2].

IATA is pivotal in the worldwide accreditation of travel agents with exception of the U.S., where this is done by the Airlines Reporting Corporation. Permission to sell airline tickets from the participating carriers is achieved through national member organizations.