"Law of the air" fans have a lot to learn from our friends at sea. So we consider today "Seasteading." That is the term Patri Friedman coined for his project, creating “land” that can float on the ocean, out of bounds of current borders. This aim is very similar to our aim, to create dwellings floating in the air.
Brian Doherty summarized the status of Seasteading in 2009. He attended theirconvention and wrote,

I am struck by how few would-be seasteaders have actual nautical experience, as opposed to lots of clever ideas about flotation, breakwaters (to protect floating domiciles from waves, including the dreaded, superpowerful “rogue waves”), and transportation of seastead-sized objects. One attendee—Mikolaj Habryn, who works for Google—tells me hetook a sailing course out of his interest in the topic, but for the most part these are not people with saltwater in their veins. They are computer types, social and physical engineers, and visionaries who for various reasons think experimenting with new social forms is an exciting challenge. Many of them tell me they are not likely to be early adapters living on small-scale experimental seasteads; instead they plan to wait until the business environment offshore has room for their careers, or until the comfort level for landlubbers rises a bit.

This lack of high-seas experience might be just fine. While ocean living creates unique challenges and costs—Friedman refers to these as the “ocean tax,” recognizing that seasteaders must eventually make the cost lower than the “government tax” you suffer on land—most prospective seasteaders think the obstacles can be largely overcome through money and thought. Human beings already know how to generate power on isolated locations off the grid. Wind, solar, and diesel strike Friedman as the most obviously feasible, and the ocean will probably provide a particularly suitable environment for wind power. Although seasteads probably will try to grow their own food, it can be shipped in if needed; the ocean is all about moving big things cheaply.
What about that most time-tested vessel for living on the sea: the boat? Modularly connecting the vehicles into larger communities seems tricky. Friedman’s ideal seasteading community can start small, grow marginally as the idea or the techniques improve enough to attract more people, and be able to both expand and contract as social experiments succeed or fizzle in the judgment of each individual seasteader. He fears boats don’t provide much room for self-sufficiency in food and power, let alone comfortable long-term living, given their space limitations. Finally, he’s leery of the “Just useboats!” line of thinking because ships are simply too old-fashioned to capture the visionary imagination in the way he thinks seasteading must if the movement is to thrive. Still, Friedman has been moved enough by the obvious immediate advantages in cost and proven legal status to think that living on retrofitted old ships might be a reasonable starting point for experimenting with his ideas.

Oil platforms, another existing model of ocean living and working, are cost-effective because they extract a valuable commodity. But seasteaders cannot, and don’t expect to, begin with resource extraction. That would certainly run afoul of both the Law of the Sea Treaty and any number of existing government and corporate interests that claim to have a say over how ocean-based resources should be used and allocated. For the same reason that taking over existing land is a bad idea for nascent seasteaders, anything that suggests a challenge to existing wealth and authority could hobble the movement while it’s still trying to find its sea legs.
Indeed, this aspirationally lawless bunch muses throughout the conference in Burlingame over the extent to which the world would view all seasteaders as a part of the same team, and thus whether seasteads would have to, gulp, police each other to prevent one bad apple from spoiling the bunch. They do not reach a conclusion.
Seasteaders do have a legal adviser: Jorge Schmidt, an attorney who has experience with the Law of the Sea Treaty. Schmidt is careful to tell me there are plenty of unknowns awaiting future floaters, although he approves of Friedman’s basic framework: get your seastead out of the 12-mile range that countries claim full sovereignty over, don’t mess with resources in the 200-mile exclusive economic zone that most nations also assert, and emulate existing ships in international waters by arranging with some nation to obtain a “flag of convenience” marking seasteads as under its protection. In open waters, only nations have rights. Individuals without a stable flag are considered pirates and outlaws.
The seasteading project benefits from the fact that many poorer countries are willing to sell their sovereignty to the highest bidder in a flag-of-convenience process that works to the buyer’s advantage. “I definitely think at the start those countries will want a cut [of whatever economic benefit a seastead produces], but keep in mind we’re in a good negotiating position,” Friedman says. “We can talk to every country in the world and only need one to give us the deal we want, and we can have them bid against each other for how low the cut can be.”
Schmidt speculates that full sovereignty might never happen for seasteads, but that it might not matter. “Maybe we’ll get 95 percent of what we want just paying Tuvalo,” he tells me. “If that’s the case, why go the extra step?” Reality is nine-tenths of the law: “What’s most important is to get things running, to have something concrete that works. Once we have that, the actual dynamics fuel themselves, rather than expectations and theory.”

Seasteading is currently considering life on ships, as opposed to anchored off-shore drilling platforms. This vision is closer to ours of un-anchored domiciles bobbing on the atmosphere's waves.
The passive air-dwelling community can learn a lot from these seasteaders--perhaps they will teach us to become airsteaders.
Links
Seasteading Institute, http://seasteading.org/
Seasteading in Wikipedia: http://en.wikipedia.org/wiki/Seasteading
Reason.com article by Brian Doherty discussing Seasteading and its political aspects: http://reason.com/archives/2009/06/08/20000-nations-above-the-sea/print
RSS feeds
Posted by lawoftheair at 10/29/2010 08:54:00 AM No comments: 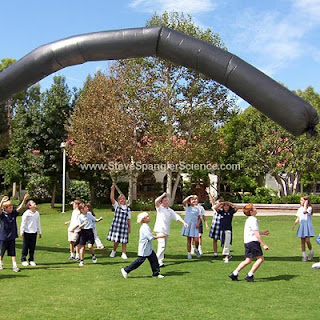 Created by SteveSpanglerScience.com The Solar Bag measures 15 meters (50 ft) long and 74 cm (29 in) in diameter. The thin, black plastic bag holds over 60 cubic meters (200 cubic ft) of air. Simply fill with air by running, tie off the ends, and let the solar energy of the sun heat the air inside the bag. Within minutes, the bag rises to the sky and floats like a giant solar sausage. 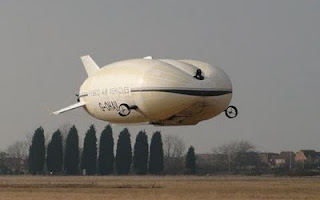 Hybrid Air Vehicles are making exciting progress. The LEMV will implement their technology. Horatia Harrod at the Telegraph wrote a good summary of state of the art air ship technology, below.

At Cardington Airfield, just south of Bedford
, two vast corrugated steel hangers tower over the surrounding area. More than 800ft long – the length of almost three football pitches – and 190ft high, they are the heroic relics of the once great British airship industry.
Eighty years ago, two mighty vessels, the R100 and the R101, were housed in these great metal behemoths
; incredible ‘lighter-than-air aircraft’ – with customised silver and crockery, Axminster carpeted smoking rooms and portholed cabins – that were designed to sail noiselessly across the Atlantic like aeronautical cruise ships.
Further down the road, housed in a far less spectacular stack of Portakabins, is a group of engineers who a
re convinced such airships can take to our skies once more. Hybrid Air Vehicles has built a scale prototype of what will soon be the largest flying vessel in the world – a huge balloon made of ultra-lightweight, super-strong polyester on top of a hovercraft landing system. If it works, it could change the future of flight.
Which is why, when you bear
in mind the company’s grand plans, the Portakabins seem so incongruous. They’re only a temporary home but they make the outfit look a bit, well, amateurish. Someone who finds them more than usually annoying is Gordon Taylor. He is the company’s marketing man, a softly spoken but fastidious Canadian in a pink shirt, chinos and a red tie covered with frolicking dogs. A wayward tuft of hair gives him the air of an eccentric professor.
For the past 13 years, Taylor has been fighting a battle with investors, governments and the general public over the perception of the airship. ‘I’ve never seen a more peculiar industry than ours,’ he says as he leads me through the makeshift office on a bright mid-June morning. ‘There are more nutcases…’ He sighs and sips at his mug of Lady Grey. ‘You get what we call “the giggle factor”. People laugh at lighter-than-air vehicles and the guys who make them: the “helium heads”. It’s taken a long time to overcome that.’
The problem, Taylor admits, is that an airship has a deceptively simple, cartoonish appearance. It looks like a blobby thing with a motor, ‘a party balloon with bits on’, as Mike Durham, the heavy-browed, sardonic chief engineer puts it.
‘We’re regularly sent unsolicited proposals telling us how to build airships,’ Durham says wearily. ‘They’re either from 85 year-olds who were once engineers in the pencil business, or little design companies who think they’ve had a brilliant new idea and this is how it should be done.’
This may not sound like a serious problem, but it is. Fred in his shed in Hertfordshire isn’t likely to put forward a proposal to the Government to build a new aeroplane, because big companies like Airbus and Boeing are so well established. But he, and dozens of other mad inventors, will merrily deluge the Government with their ideas for a marvellous new airship. It makes the industry look silly and brings the credibility of the whole business into question, which in turn frightens away would-be investors.
Airship amateur hour is especially frustrating for the team at Cardington because they’re in the process of creating something that absolutely could not be sketched on the back of a beer mat. And Taylor is most particular about the nomenclature of the new development: it’s not an ‘airship’, he says, it’s a ‘hybrid air vehicle’.
‘It’s a new vehicle. It’s a hybrid because we’re combining helium lift, aerodynamic lift, a hovercraft landing system and vectored thrust,’ he says. ‘If you can get beyond the word airship – because that has a lot of history – people think about them differently.’
Taylor struggles to keep the team on-message about the new name: ‘I’m a right pain in the a--- about it,’ he says. Not everyone is convinced that ‘hybrid air vehicle’ will catch on. For one thing, it isn’t snappy and for another, the fundamental points of physics that differentiate it from an airship are beyond the grasp of most mulish lay people. As Dave Burns, the company’s steely-eyed Scottish test pilot, says wryly: ‘If it’s called an airship that’s a lot better than it could be called.’ 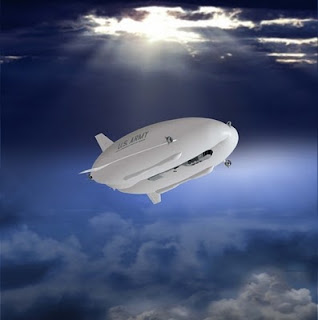