Drones Approved for US Airspace

The monopoly of air space by large commercial heavier-than-air craft cracked a little this week, when the USA's FAA approved us of airspace up to 400 feet for drone use. These drones vary from military models costing $400K to home made rotors--more about the military models at the end of this post.

But first, an Atlantic Society of Radio Control Modellers meeting flying a

According to the N. Y. Times,


Under the new law, within 90 days, the F.A.A. must allow police and first responders to fly drones under 4.4 pounds, as long as they keep them under an altitude of 400 feet and meet other requirements. The agency must also allow for “the safe integration” of all kinds of drones into American airspace, including those for commercial uses, by Sept. 30, 2015. And it must come up with a plan for certifying operators and handling airspace safety issues, among other rules.

The American Civil Liberties Union and other advocacy groups may protest the new law citing ever-increasing "routine aerial surveillance of American life.” Yes, that is a concern, but innovation with small accelerometers, electric motors and cameras sounds like healthy innovation to me.

Passive flight enthusiasts should be greatly encouraged that hobbyist activity and small business activity can bring about a change in the FAA rules. Oh, wait, there is the military-industrial connection.

With the winding-down of the war in Afghanistan, where drones have been used to gather intelligence and fire missiles, these manufacturers have been awaiting lucrative new opportunities at home. The market for drones is valued at $5.9 billion and is expected to double in the next decade, according to industry figures. Drones can cost millions of dollars...

Many organizations are gearing up for this type of business; one sign is the opening of generic "spam" web portals such as UAVM.com, where they write

In the very near future, Unmanned Aerial Vehicles (UAVs) will become Standard Tools for a wide variety of Civil Engineering, Precision Agricultural, Livestock and Land Management, Industrial, and Homeland Security, Industrial Security, Police-Fire as well as for many other Commercial Applications not currently serviced or serviced by manned aircraft.

The passive flight community may find such motorized drones to be pests some day, but it is encouraging that the airspace is being shared. I assume that the military use of lighter than air vehicles will also make an impact.

Flying people? Well, actually remote powered drones that look like people. it was a publicity stunt designed by Thinkmodo for the movie "Chronicle," about teenage superheroes, due to release Feb. 3 2012. Still, a beautiful image of life in the air.

The spirit of the Zeppelin recently inspired Tiago Barros, an architect from New York who also worked in Beirut and Abu Dhabi, to propose his "Passing Cloud" concept for a New york competition. 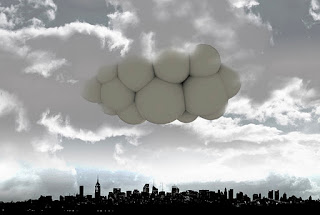 Mr. Barros wrote in his proposal:


This project envisions a distinct approach towards moving around the United States being also a revival of the act of traveling. Why traveling at high speed? Why having the final destiny always defined? And why always departing and arriving on a tight schedule? Nowadays, everything is set and everyone is always running around. It is time to reconsider the act of traveling and start enjoying it accordingly. 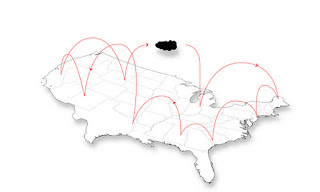 The Passing Cloud is an innovative and environmentally friendly method of transportation that doesn’t require expensive steel tracks or concrete highways. It is made of a series of spherical balloons that form the shape of a cloud. Its inner stainless steel structure is covered with heavy weight tensile nylon fabric. During the journey, It moves according to prevailing winds speed and direction at the time of travel. Since it moves with the wind, no wind is ever felt during the trip, offering the passengers a full “floating sensation”. 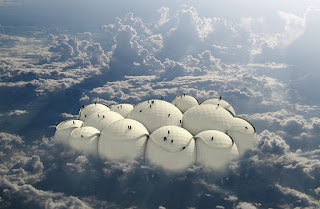 It’s an unique journey. The feeling of floating in the atmosphere – on top of a cloud – with an open schedule and unknown final destiny. All National Ground would be potentially covered at virtually no cost and the help of the wind. The journey becomes your destiny. 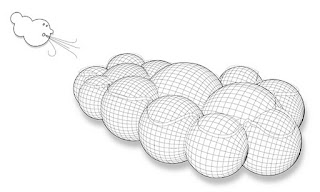 The competition was thinking along other lines. In its prospectus, the Van Alen Institute requested


...visions of the architectural design community, planners, graphic designers, artists—anyone who wants to contribute to the discussion surrounding high-speed rail.... projects and narratives picturing the wide-ranging impacts that a new transportation network will have on the nation’s communities, whether urban or rural, rail-riding or car-centric, heartland or borderland. By collecting these ideas and images of a transformed America—be they specific, pragmatic, or speculative—we’ll better understand the hopes and fears of our current moment and be better equipped to decide whether and how we build this new infrastructure.

We at Law of the Air applaud Mr. Barros for his submission. While his contribution did not win, it reminds all of us to slow down, contemplate, and savor life and, as he writes, "sensation." Not sensational speed--sensation when it is most pregnant with reality, when we are calm, present, and floating in the air. 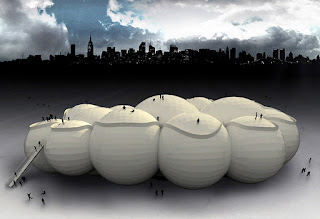 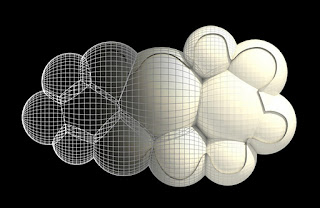