The graphic below enables visual comparison of flight pattern differences between the 10 most active aircraft models being monitored by the FAA on August 12, 2008 over a 24-hour period. It is one of about ten overlapping graphics at the link below. By clicking the buttons on the right, you can toggle images, and check out differences such as range (for example, the Boeing 738 is capable of traveling 3,060 nautical miles in a flight, while the Canadair Regional Jet (CRJ2) at 980 nautical miles is a puddle jumper). 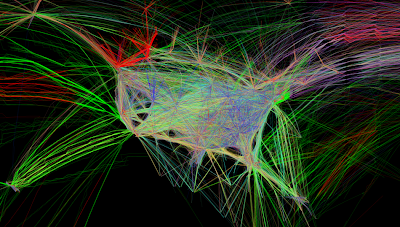 This project was a collaboration between Koblin, FlightView and Wired Magazine.